Consider the FSM described by the state diagram shown below: 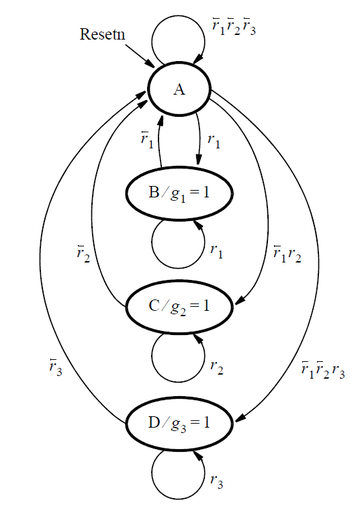 This FSM acts as an arbiter circuit, which controls access to some type of resource by three requesting devices. Each device makes its request for the resource by setting a signal r[i] = 1, where r[i] is either r[1], r[2], or r[3]. Each r[i] is an input signal to the FSM, and represents one of the three devices. The FSM stays in state A as long as there are no requests. When one or more request occurs, then the FSM decides which device receives a grant to use the resource and changes to a state that sets that device’s g[i] signal to 1. Each g[i] is an output from the FSM. There is a priority system, in that device 1 has a higher priority than device 2, and device 3 has the lowest priority. Hence, for example, device 3 will only receive a grant if it is the only device making a request when the FSM is in state A. Once a device, i, is given a grant by the FSM, that device continues to receive the grant as long as its request, r[i] = 1.

Write complete Verilog code that represents this FSM. Use separate always blocks for the state table and the state flip-flops, as done in lectures. Describe the FSM outputs, g[i], using either continuous assignment statement(s) or an always block (at your discretion). Assign any state codes that you wish to use.

Or upload a file